To share your memory on the wall of Doris Massé, sign in using one of the following options:

Receive notifications about information and event scheduling for Doris

We encourage you to share your most beloved memories of Doris here, so that the family and other loved ones can always see it. You can upload cherished photographs, or share your favorite stories, and can even comment on those shared by others.

Posted Jul 24, 2020 at 07:27pm
Doris will always be known for her hard work and commitment to BHC. She was a true leader and always maintained a strong focus on the patient. Rest easy, Doris.
Comment Share
Share via:
RK

Posted Jul 23, 2020 at 02:53pm
Annette, Stan and Families, Frank and I send out our condolences, thoughts and prayers to all the families. Memories Eternal.
Comment Share
Share via:
YB

Posted Jul 22, 2020 at 10:34pm
I have fond memories of Doris. Forty some years ago, when I needed a sitter she was there for me with a smile. She had four little ones of her own and took my newborn daughter. Her love, compassion, kindness towards everyone she met was remarkable. She was such a hardworking mom and friend. Her love was beyond measure.
Doris always put everyone else first. She became a life long friend. Everything she did was with a smile. She was also so gentle and soft spoken. I will miss you dearly but heaven certainly has gained another most beautiful angel. Rest In Peace. My sincere condoléances to her family and Annette and Joanne. Yolande Beaunoyer
Comment Share
Share via:
RC 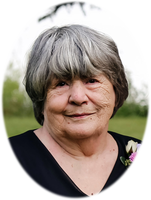