To share your memory on the wall of Arnold Lightbody, sign in using one of the following options:

Provide comfort for the family of Arnold Lightbody with a meaningful gesture of sympathy.

Receive notifications about information and event scheduling for Arnold

Donations are being accepted for: Royal Canadian Legion Branch 29.

We encourage you to share your most beloved memories of Arnold here, so that the family and other loved ones can always see it. You can upload cherished photographs, or share your favorite stories, and can even comment on those shared by others.

Posted Mar 05, 2020 at 07:48am
Aunt Alice & all the Family; Remember that we love and care about all of you. We will have fond memories of Uncle Arnold's laughter forever!

Flowers were purchased and a memorial tree planted for the family of Arnold Lightbody. Send Flowers

Posted Mar 05, 2020 at 01:41am
My deepest sympathies to the Lightbody family. Arnold was a great guy and coached me in bowling for many years when I was growing up. My favorite memory is the day after my wedding him and my dad sharing a drink in the back yard together. He will be missed!
Love to all.
Comment Share
Share via:
F 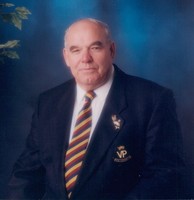