Memorial Candle Tribute From
Memento Funeral Chapel
"We are honored to provide this Book of Memories to the family."
View full message >>>
In Memory of
Denis
Richardson
1931 - 2020
Menu
Send Flowers 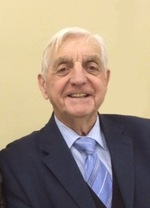 It is with sad hearts that the family of Denis Richardson of Bonnyville, Alberta announces his passing with family by his side, on Saturday, January 4, 2020 at the age of 88 years.
Denis is lovingly survived by his wife of 60 years: Doris Richardson of Bonnyville, AB; five children: Marcia (Peter) Moll of Chilliwack, BC, Heather Richardson of St. Albert, AB, Denise (Brad) Scott of Bonnyville, AB, Dwayne (Kim) Richardson of Bonnyville, AB, Crystal Zazula of Bonnyville, AB; twelve grandchildren; fifteen great grandchildren; two sisters: Joan Wardle of Halifax, England, Sylvia Daveney of Halifax, England; sister-in-law: Rita Richardson of Halifax, England; as well as numerous nieces & nephews.
Denis was predeceased by his parents: George & Evelyn Richardson; four brothers.
Denis lived his life by the bible, serving Jehovah his God, and looked forward to the hope of God’s Kingdom being established here on earth. The most intriguing part of his hope was not only living forever, but the resurrection of his loved ones and being able to share eternal life with them in a peaceful new world, Paradise Earth.
A Memorial for Denis will be held Saturday, January 11, 2019 at the Kingdom Hall of Jehovah’s Witnesses in Bonnyville (4125 49 Ave) at 2:00 p.m.
Memorial tributes in memory of Denis may be sent to Jehovah’s Witnesses via jw.org or Alzheimer Society, 10531 Kingsway Ave, Edmonton, AB T5H 4K1.