To share your memory on the wall of Alan Jeffrey, sign in using one of the following options:

Receive notifications about information and event scheduling for Alan

Donations are being accepted for: Cross Cancer Institute.

We encourage you to share your most beloved memories of Alan here, so that the family and other loved ones can always see it. You can upload cherished photographs, or share your favorite stories, and can even comment on those shared by others.

Posted Oct 31, 2019 at 07:39pm
Sympathy is extended to Kassi and family from Doug and Teresa . A donation has been made to the Cross cancer foundation in memory of your Dad .
The Davidson family .
Comment Share
Share via:

Posted Oct 31, 2019 at 02:08pm
Dear Deb,
We are so very sorry to hear of Al’s passing. You and he made me feel so welcome when I moved to Cold Lake. Al was a good and kind man with a great sense of humour. He definitely lit up a room! Keith and I always enjoyed spending time with you both. Al will be missed by the many people whose lives he touched. Sincere condolences to you and your family.
Shannon and Keith
Comment Share
Share via:

Posted Oct 28, 2019 at 05:19pm
At this sorrowful period in your life, please accept my sincerest condolences for the death of your loved one.  Reflecting on the divine promises found in the Bible will give you hope and strength to keep going until all of God's promises are fulfilled. (Romans 15:13; John 5:28, 29).

Posted Oct 28, 2019 at 05:17pm
At this sorrowful period in your life, please accept my sincerest condolences for the death of your loved one.  Reflecting on the divine promises found in the Bible will give you hope and strength to keep going until all of God's promises are fulfilled. (Romans 15:13; John 5:28, 29). 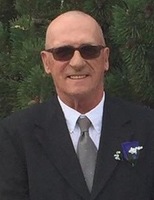