To share your memory on the wall of Bruce Lockhart, sign in using one of the following options:

Print
On October 10, 2019, Bruce Lockhart passed away at the age of 64 years. Bruce was born in 1955 to Don and Doreen Lockhart in Cold Lake, Alberta.

In 1973, Bruce completed his final year of high school at Camrose Lutheran College, which i... Read More
On October 10, 2019, Bruce Lockhart passed away at the age of 64 years. Bruce was born in 1955 to Don and Doreen Lockhart in Cold Lake, Alberta.

In 1973, Bruce completed his final year of high school at Camrose Lutheran College, which is where he met Doris Prichard. They married in 1976.

Bruce attended NAIT for radio broadcasting, later working for the Ministry of Transport in Sachs Harbour, NWT, where he became proficient in Morse code. In Fort McMurray, he worked for Sun Life Financial. When his son, Andrew, was born in 1980, he returned to Cold Lake to join his father at Lockhart Financial Services. Four years later, his daughter Jessica was born. An active member of the community, Bruce volunteered on numerous boards including for the United Way, the Cold Lake Sailing Club, Boy Scouts and the Marina Commission.

If you ever mistook Bruce as being reserved, that assumption would be quickly dispelled by one of his sly jokes or stories. Passionate about music, his rendition of “Mustang Sally” was something of legend (as was—much to his daughter’s chagrin—“Who Let the Dogs Out”). An avid traveller, he was most at home in Cold Lake. He belonged sailing across the lake’s waters; skiing through the park; taking long Sunday drives; and photographing wildlife. In his final years, Bruce fought but lost in his struggle with mental illness and addiction. Through it all, he was known for his profound altruism and generosity.

He will lovingly be remembered as a wonderful father, husband, brother, uncle and friend. He is survived by Doris Lockhart; his children, Andrew and Jessica Lockhart; his siblings Judi Florence (Keith Mowat) and Bev Williams (Todd) and their families; cousins; and extended family and friends. He was predeceased in death by his parents Don and Doreen Lockhart, and his brother-in-law and friend Bryce Florence.

A small family graveside service will be held and Bruce’s ashes will be buried at Cold Lake’s Lakeview Cemetery in the Lockhart family plot.

Donations in memorial may be made to the Cold Lake Hospital Foundation Society for the Palliative Care Unit at PO Box 1505 Stn Main, Cold Lake, AB, T9M 1P4, or to the University of Alberta’s Neuroscience and Mental Health Institute at University of Alberta, 4-120 Katz Group Centre, Edmonton, AB, T6G 2E1.

Receive notifications about information and event scheduling for Bruce

We encourage you to share your most beloved memories of Bruce here, so that the family and other loved ones can always see it. You can upload cherished photographs, or share your favorite stories, and can even comment on those shared by others.

Posted Jun 12, 2020 at 03:39am
Very sorry to hear of Bruce’s passing. I worked with Bruce when I was a rep for Spectrum Investments and he was with Sunlife.
Bruce was a respected, engaged, thoughtful financial advisor. We had talked about a sail on cold lake or perhaps out of comox. I regret we never got the chance. Condolences to Bruce’s family and friends . Sean Hirtle

Posted Nov 04, 2019 at 12:21pm
So very sorry to hear of Bruce's passing.He was a great friend to my Dad,Doug Stevens and enjoyed all Bruce's sailing stories. My sincere condolences to the family.
Comment Share
Share via:
DC

Posted Oct 21, 2019 at 01:50pm
Our condolences to the Lockhart family. We have many fond memories of sailing, racing, including watching Bruce perform “Mustang Sally” At Cold lake 20 years ago. 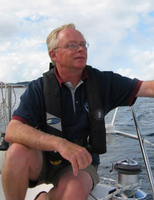