To share your memory on the wall of Daniel Barrowman, sign in using one of the following options:

Receive notifications about information and event scheduling for Daniel

We encourage you to share your most beloved memories of Daniel here, so that the family and other loved ones can always see it. You can upload cherished photographs, or share your favorite stories, and can even comment on those shared by others.

Posted Oct 09, 2019 at 07:31pm
Sorry I am unable to attend Dan's service. He will be greatly missed. He was kind and generous . I met Dan back in 1965 when my sister, Sharon went to teach at Big Head reserve. I had connections with him through his nieces,, Shirley and Sheryl and his sister, Kathy. Then again with my sister -in-law and brother -in- law, Doris and Ray Baldock who lived in his yard and Ray pipelined with Dan. When we had the restaurant he would come in with a grin and you knew he had something to tease you about. Dan was loved by all who knew him. Thinking of all his family and sending my deepest sympathy. Love Shirley & Tom Blenkin of Davidson, Sask.
Comment Share
Share via:
T 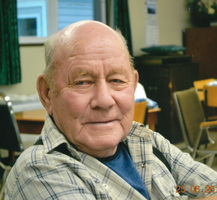